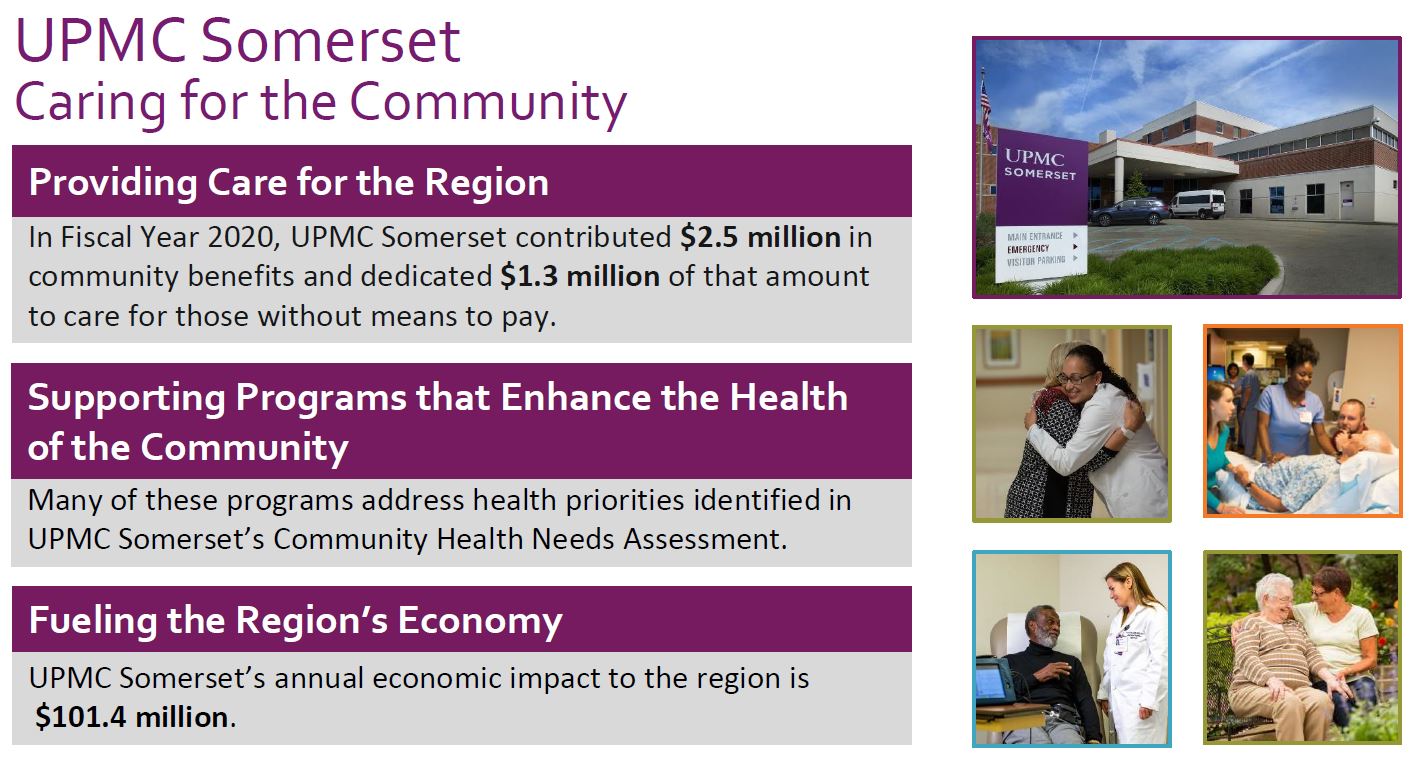 Somerset, Pa., June 3, 2021 –  UPMC Somerset provided $2.5 million in IRS-defined “community benefits” last year for programs and services to improve the health and quality of life of all the communities UPMC Somerset serves. The $2.5 million total includes:

In addition, UPMC Somerset has a powerful effect on the local economy with a total annual economic impact of $101.4 million. The hospital’s spending has a multiplier effect that ripples benefits throughout the area.

“UPMC Somerset is committed to providing programs and services that benefit the health of the people and communities that we serve. According to the most recent publicly available data, UPMC contributes more than what any other health system in Pennsylvania contributes, and we’re proud to be part of that,” said Andy Rush, president of UPMC Somerset.

A $23 billion health care provider and insurer, Pittsburgh-based UPMC is inventing new models of patient-centered, cost-effective, accountable care. The largest nongovernmental employer in Pennsylvania, UPMC integrates 92,000 employees, 40 hospitals, 800 doctors’ offices and outpatient sites, and a more than 4 million-member Insurance Services Division, the largest medical insurer in western Pennsylvania. In the most recent fiscal year, UPMC contributed $1.7 billion in benefits to its communities, including more care to the region’s most vulnerable citizens than any other health care institution, and paid more than $900 million in federal, state and local taxes. Working in close collaboration with the University of Pittsburgh Schools of the Health Sciences, UPMC shares its clinical, managerial and technological skills worldwide through its innovation and commercialization arm, UPMC Enterprises, and through UPMC International. U.S. News consistently ranks UPMC Presbyterian Shadyside among the nation’s best hospitals in many specialties and ranks UPMC Children’s Hospital of Pittsburgh on its Honor Roll of America’s Best Children’s Hospitals.  For more information, go to UPMC.com.